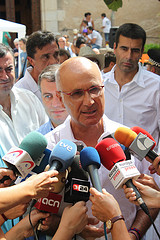 Spain’s political leaders have been reacting to President Obama’s comments this morning.

Josep Antoni Duran i Lleida (pictured), spokesman of the CiU in Congress, has been particularly outspoken about his views on the US premier’s earlier remarks. President Obama’s suggestion that Spain was the Eurozone’s next big problem was “not the most responsible thing to do,” Duran said this afternoon.

He added: “All leaders should be responsible in moments as delicate as this. I do not believe that President Obama is in the best position to give lessons to the rest of the world, because the North American economy also has a very significant deficit.”

The spokesman for the PP in Congress, Soraya Sáenz de Santamaría, was less critical of Obama, although politely reminded him that those in glass houses shouldn’t throw stones. She said: “In the PP we want Spain to turn the page on the convulsions and uncertainties that we have been living through these past months, and I imagine that Mr Obama himself wants the same for the United States”.

Obama fears Spain could be Eurozone’s next “big problem”

All eyes are on the economy again in Spainthis morning. The news that Greece may not have enough money left to pay public sector workers and pensions has caused panic in the markets.

Particularly badly affected was the Spanish Ibex stock exchange, which tumbled as Greece’s admission about their financial nightmare led to panic.

The flames of worry have been fanned somewhat by the President of the United States, Barack Obama (above), who has warned that the sovereign debt crisis in Spain poses a “great problem” to the Eurozone’s recovery. He rightly urged the Eurozone members to act fast to seek a common economic policy and deeper fiscal integration to deal with the sovereign debt crisis which threatens to spread to Spain and Italy. Obama also called on countries with a budget surplus to help those in crisis, an act which he believes will steady the markets and give them confidence.

The Spanish Government has so far refused to comment on President Obama’s remarks – Economic Minister Elena Salgado sidestepped questions by reporters this morning on the issue.

However, the PSOE’s presidential candidate, Alfredo Pérez Rubalcaba, appearing alongside Salgado, explained that Obama was simply urging Eurozone members to “stop the contagion”. He went further, suggesting that the key is to resolve the Greek problem and “isolate” that country to prevent contagion to the rest of the economies.